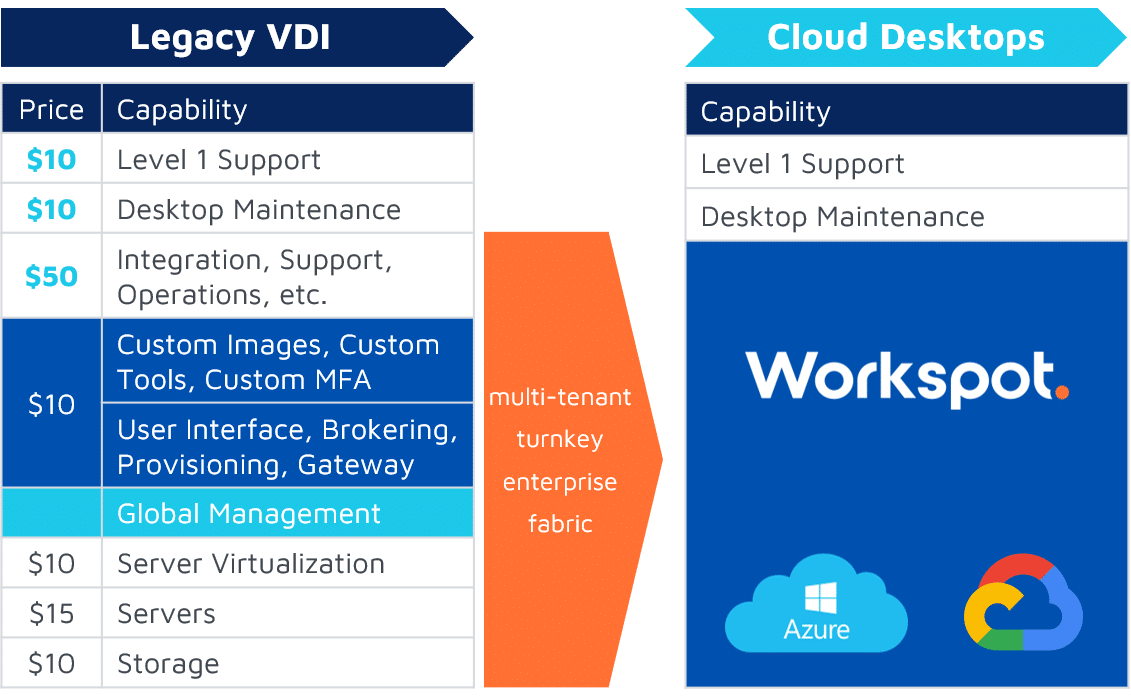 In the shadows of the digital workspace giants Citrix, VMware, and Microsoft, the SaaS / DaaS company Workspot, which focuses on enterprise Cloud PCs, has been growing steadily since its inception in 2012 and has found its way into Fortune 500 firms. Workspot’s Cloud PC vision and architecture was developed from the ground up over the last decade, which has allowed them to develop a platform drastically different than competitors and solve for key use cases that the big three have struggled to do.

Painstakingly developed over the past decade and working closely with customers to solve unique global digital workspace challenges, Workspot is entering a new phase of its evolution. With their industry-tested solution in hand and success stories and case studies with numerous customers with household and IT industry names, Workspot is expanding its channel through a new partner program, of which Ferroque Systems is a founding member. In parallel to the launch of Workspot’s Cloud Alliance program, new licensing model capabilities are being released to allow customers and partners more freedom in selecting which Workspot model best suits their needs, from license-only to a near-fully managed DaaS/SaaS solution.

Workspot’s senior leadership and board are comprised of EUC / digital workspace veterans. Having spent nearly a year interfacing with Workspot, I can say with confidence after spending much time with their leadership, sales & marketing, and product ranks, the team is product-focused and passionate about innovation which is refreshing and reminds one of the earlier days of the remote access and digital workspace industry.

Workspot’s Net Promoter Score (NPS) is 80. That is very high for a tech company, where a score in the 20’s is deemed good (the benchmark varies per industry, but 80 is well above the industry benchmark for consulting, technology, and cloud/SaaS industries). What’s clear is that Workspot customers seem to absolutely love the service. Customers come from a variety of industries, many with a global presence, and spanning an install base of tens of thousands of seats.

Well, simply put, Workspot is the industry’s first “Cloud PC” long before Microsoft started popularizing the term in the early 2020s. Architected from the ground up as an infrastructure-as-code platform, it is a truly cloud-native and scalable SaaS/DaaS solution that runs on Azure, GCP, and soon AWS, with extension capabilities to on-prem hypervisors such as vSphere.

Because it is cloud-native, Workspot includes all the core tenets one would expect of a cloud solution, such as on-demand, automated Cloud PC deployment, a true pay-grow subscription model, and no need for any on-premises components, not even a directory if one chooses.

The subscription and service model Workspot has operated for years in, has included a near fully-managed solution for their customers including managed services and a network operations centre (NOC) supporting their customers. A NOC so capable, they often have identified issues within Azure before Microsoft has, allowing Microsoft to address them and reduce customer impacts more quickly. This model has included the Azure consumption, managed service, and Workspot license within its Cloud PC pricing, allowing customers to benefit from predictable costs, and reduce customer responsibility to user and application / image update management. Additional license tier flexibility will allow partners or customers to assume more of the management and per-seat cloud costs to best align with business objectives or constraints.

The origin of Workspot was inspired by the struggles customers faced with the high costs and complexity associated with traditional VDI, used today by hundreds of millions of users around the globe.

Amitabh Sinha is co-founder and CEO of Workspot, and prior to this, led Citrix’s XenApp and XenDesktop products (including overseeing some of the transition from IMA to FMA which by the way, was driven by Citrix Director of all things) as General Manager for Enterprise Desktops and Apps. Amitabh left Citrix in early 2012 and started Workspot with Puneet Chawla and Ty Wang in the summer of 2012 to pursue his vision for a cloud-native VDI platform that would simplify the way virtual desktops are provisioned and managed, and to do for the virtual desktop industry what the likes of ServiceNow and Salesforce did for theirs. This at the time, was not something Citrix’s leadership was keen on pursuing.

Fast forward a decade and Mark Templeton, former CEO of Citrix, is chairman of Workspot’s board, and the firm boasts numerous well-respected Citrix Alumni including Brad Peterson, Jimmy Chang, Prasad Krothapalli, and many others.

The development of the Workspot platform occurred long after the big three developed theirs. Product maturity considerations aside, this means that from the outset, the team has been able to engineer their SaaS platform from an entirely new playbook, taking lessons learned from other architectures to fundamentally improve service with a net-new architecture and build in capabilities not possible in the architecture of other platforms. This is pretty typical stuff for software solutions making the leap from legacy architectures to cloud-native code. Learn from the past, what worked, what didn’t, and build entirely new code from these lessons to address emerging trends and customer needs.

I’ve observed two key paradigms that drive Workspot’s technology vision. Both are controversial, but their field experience across tens of thousands of seats and continuously positive feedback from their customers seem to support their ethos:

One thing that struck me about Workspot out of the gate through training, hands-on work, and lengthy discussions with product folks, was just how simple the architecture is. Well-versed digital workspace engineers will find that most are familiar with other platforms, but their existence is more or less where similarities end.

The architecture separates traffic flows into a control plane and data plane, largely for security reasons. As you dive into the design of Workspot, security is a common theme throughout. It is a very security-focused architecture.

The architecture of Cloud PC availability and routing connections is handled by Workspot Client, not the server-side architecture of the platform. If a user has multiple Cloud PCs in different locations for DR or geo-locality, the Client handles where the user goes, not the control plane. In a deployment with hundreds or thousands of Cloud PCs within a location, the Client determines which Workspot-managed gateway agent to send traffic through (and which to reconnect to in the event of an outage). Building this intelligence into the Client promotes higher reliability (which is the top priority of the Workspot architecture).

Working through the setup of Workspot even within a customer-managed cloud subscription is straightforward. With a few pre-requisites in place, starting from scratch, we had Cloud PCs provisioned and launching in under an hour. A lot of the layered constructs are removed within the Cloud PC delivery model of the control plane and flattened.

Workspot is not at feature parity with the likes of Citrix or VMware’s digital workspace platforms. That I wish to get out of the way first. In many cases this is due to the simplified SaaS model and the Cloud PC architecture philosophy of Workspot not requiring them. That said, there are a lot of features I feel are handled much better within Workspot or are exclusive to Workspot, which are not available in other platforms. We hope to cover many of these in future articles and guides.

Workspot has had great success in the market thus far with large enterprises now running Workspot to solve for numerous use case challenges. With a proven track record of stability, maturity, and customer satisfaction, Workspot has begun putting together their Cloud Alliance partner program. Ferroque was one of the first partners with whom Workspot worked as part of their Elite Partner Program, and as some of the very first Workspot-certified professionals in the world, we have found ourselves both optimistic and inspired by the product and the leadership.

The Ferroque team look forward to our partnership with Workspot and solving unique and modern customer challenges and requirements.