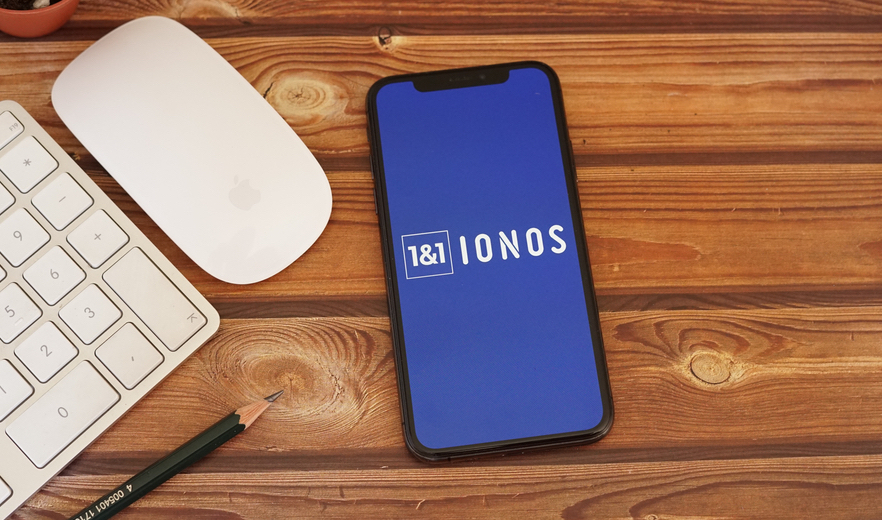 This article covers the configuration of DNS delegation in 1&1 (1AND1 \ IONOS) DNS servers to allow Citrix ADC (NetScaler) to be authoritative for a DNS subdomain. For DNS subdomain \ subzone delegation to Citrix ADC for other popular domain registrars, please refer to the following articles:

Many purpose-built enterprise DNS solutions have straightforward controls for delegating other DNS serves to be authoritative for a subzone. When dealing with DNS registrars, however, the configurations may not appear to be as straightforward. This article is intended to help guide an administrator through DNS delegation to Citrix ADC for domains hosted by 1&1 (1AND1 \ IONOS) on the Internet.

Please note that this registrar has a more straightforward process for creating subzones in their DNS control panel as compared to other DNS registrars (which is nice for familiarity), however, there are a couple more steps involved. Of note, there is a need to delete some default records when creating subzones which otherwise override desires delegation behaviours but nothing a few mouse clicks can’t rectify.

From the IONOS administration console, navigate to “Domains & SSL” and select the domain you intend to work on. From the sub-menu, select “Subdomains” and then on the right select “Add subdomain”.

Assign subzone \ subdomain name and click ‘Save’. In our example, we will be using ‘gslb’ but you may choose whatever you like, provided it is used consistently in later sections such as CNAME record creation and Citrix ADC DNS configurations.

From the subdomain view, click the cog and then ‘DNS’ to get to the DNS entry control panel for the subdomain.

The registrar auto-creates a number of DNS entries that we do not want in our configuration as it will interfere with a delegation of the subzone to authoritative DNS servers (in this case, Citrix ADC). Select the following entries and delete them by clicking ‘Delete records’ and confirming the deletion. 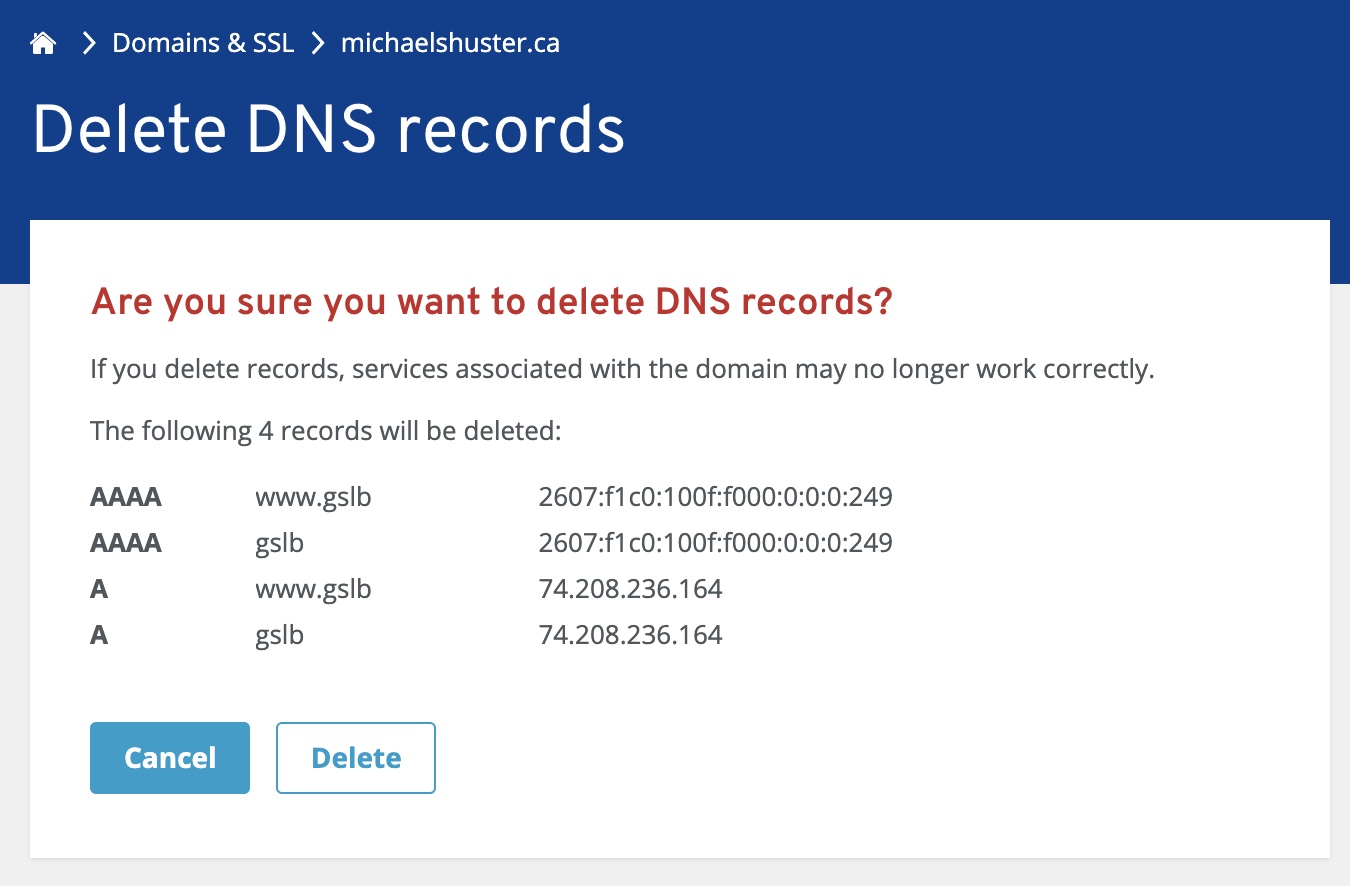 Back on the subdomain > DNS page, click “Add record” at the top of the page, and select ‘A’ to begin creating the A records. 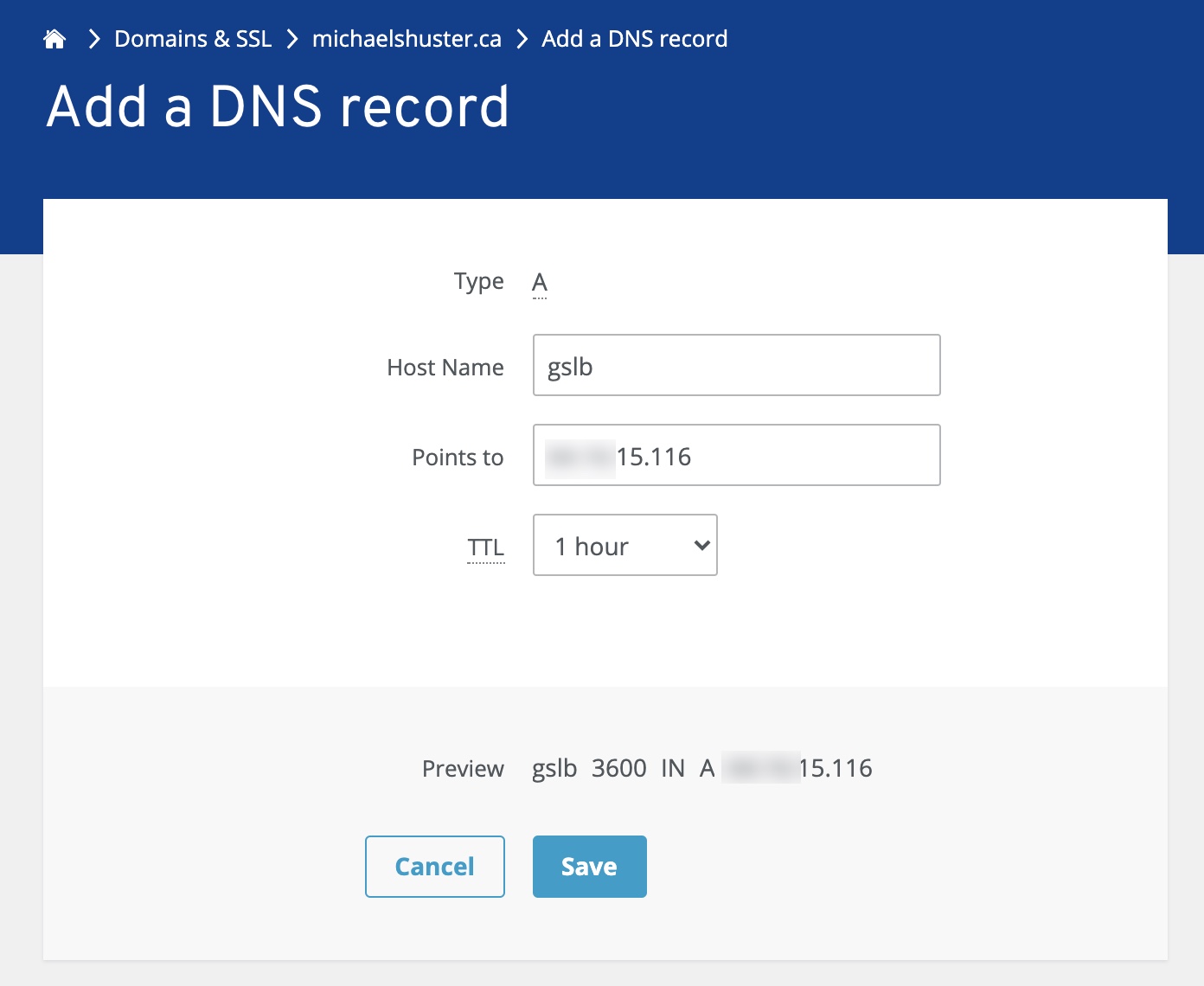 Click “Save” once complete, to commit the change, repeat for other ADNS IPs. Create A records for each of your name servers defined on the Citrix ADCs in the GSLB mesh. In this example only one A record is created. However, in a real-world implementation, you will need to create an A record corresponding to the name server public IP for each ADNS server in the solution. For example, if you have 3 GSLB Sites, you may have configured 3 ADNS IPs to support the GSLB solution, so you’d create 3 A records (one for each). An ADNS server can be authoritative for multiple DNS zones.

Back on the subdomain > DNS page, click “Add record” at the top of the page, and select ‘NS’ to begin creating the NS records. 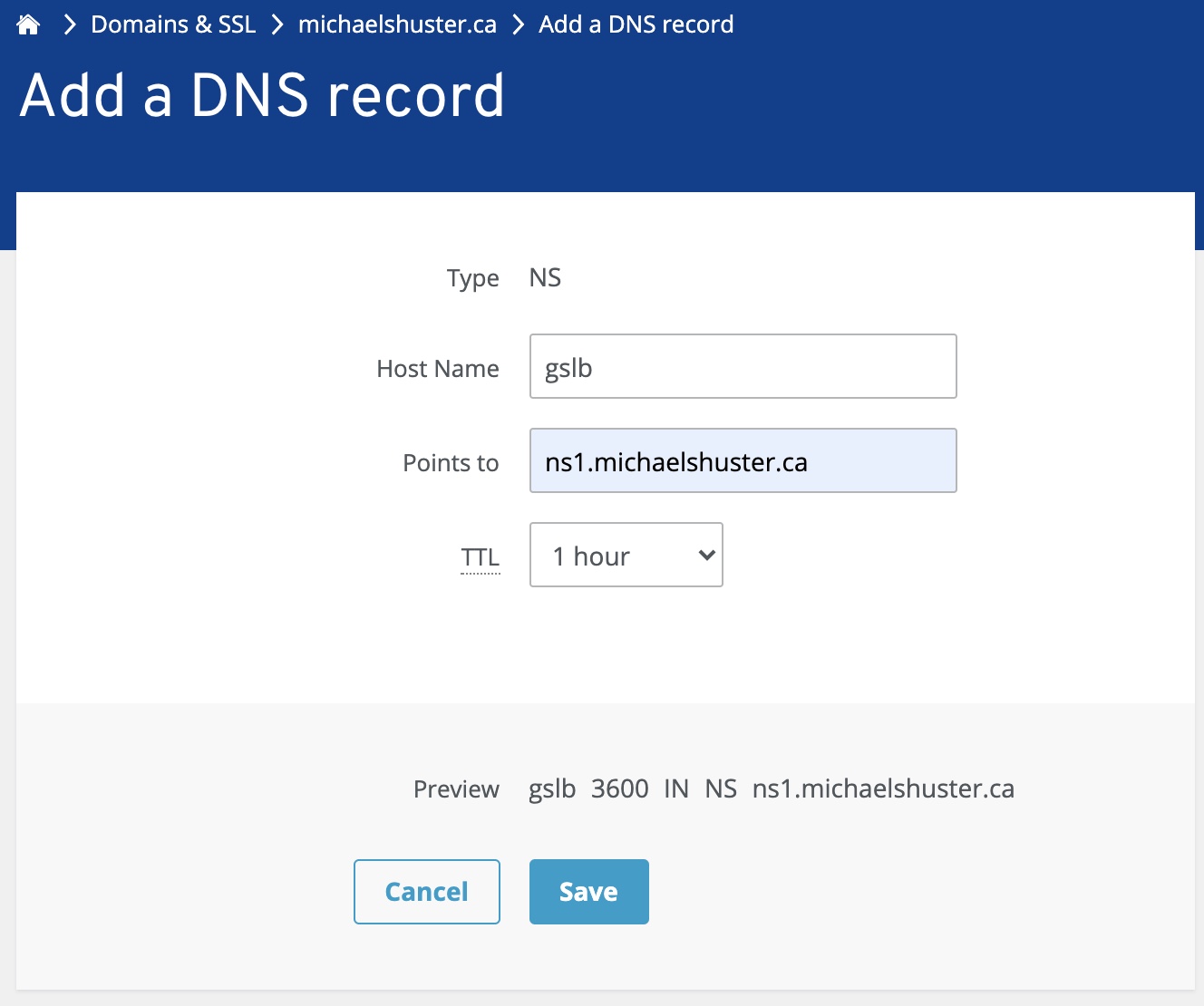 Click “Save” and repeat the process for the other name servers which will be authoritative for the subzone. In each case, the subzone name (such as GSLB) will remain the same.

Back on the subdomain > DNS page, click “Add record” at the top of the page, and select ‘CNAME’ to begin creating the CNAME record.

Populate the “Host Name” value as the user-friendly hostname, and the “Points to” value as the FQDN of the URL including the subdomain\subzone, allowing the Citrix ADCs to return the IP response to user requests. The TTL does not matter as the “points to” value would not change over the course of operation. 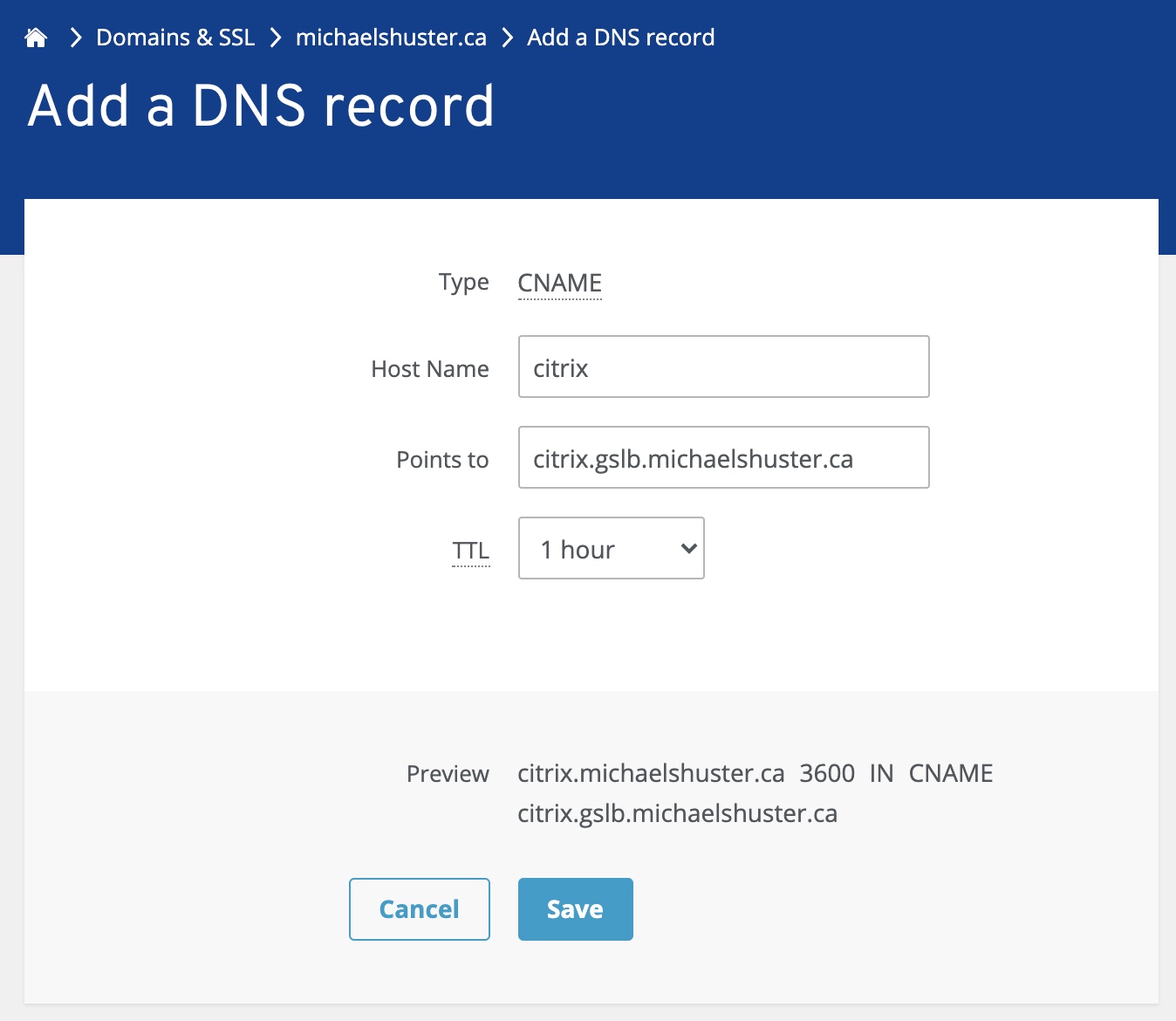 Click “Save” once complete, the DNS registrar DNS configurations are now complete.

Quick Tip: Andrew Gravett (Citrix Alumnus) has reminded me that we can conduct command-line ‘dig’ or ‘nslookup’ against our ADC DNS IPs to ensure firewall ACLs and public NATs are working correctly. Citrix has a great guide on using the dig command at this link. for example: dig @<public DNS IP> citrix.gslb.michaelshuster.ca should pump out a chunk of data with an answer section indicating the IP and record type of the FQDN I was testing against.